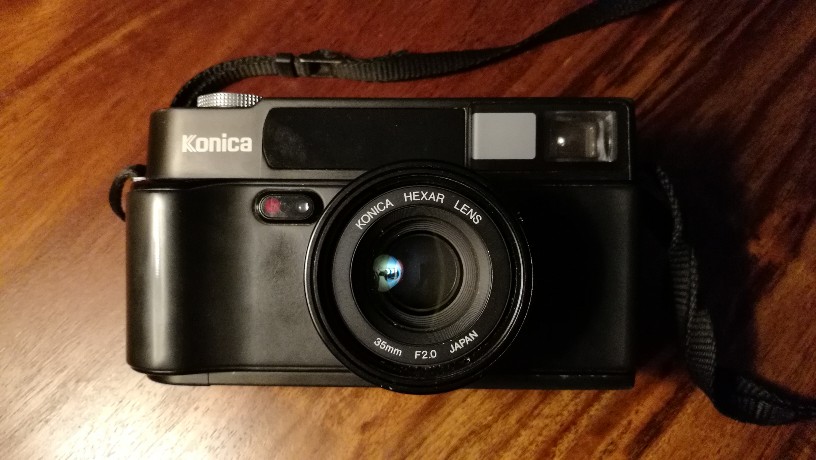 The Konica Hexar AF is a wonderful camera, becoming something of a cult classic, and is my 35mm film camera of choice. The lens is superb, on par with a Leica, and fixed, perfectly balanced with the body. The electronic menu can be baffling, but otherwise I give it ten out of ten.

Some images will enlarge when clicked…

Reflections on the Water Of Leith
Ilford Delta 400
Edinburgh 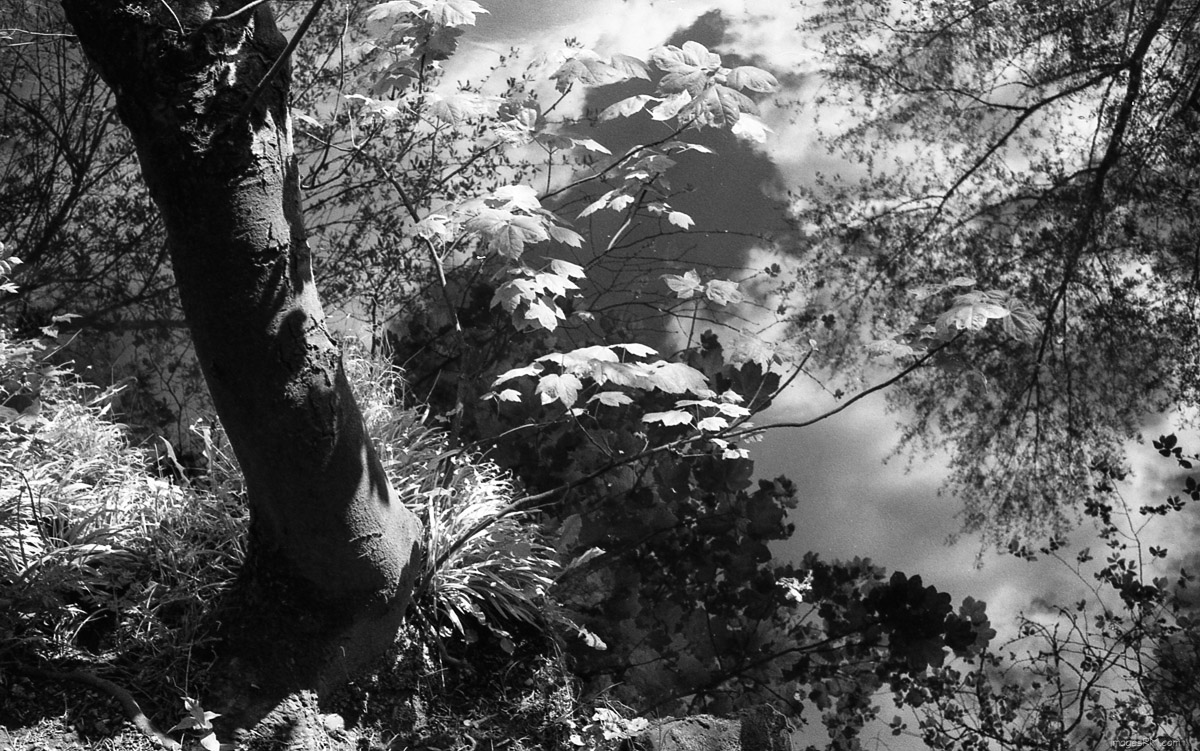 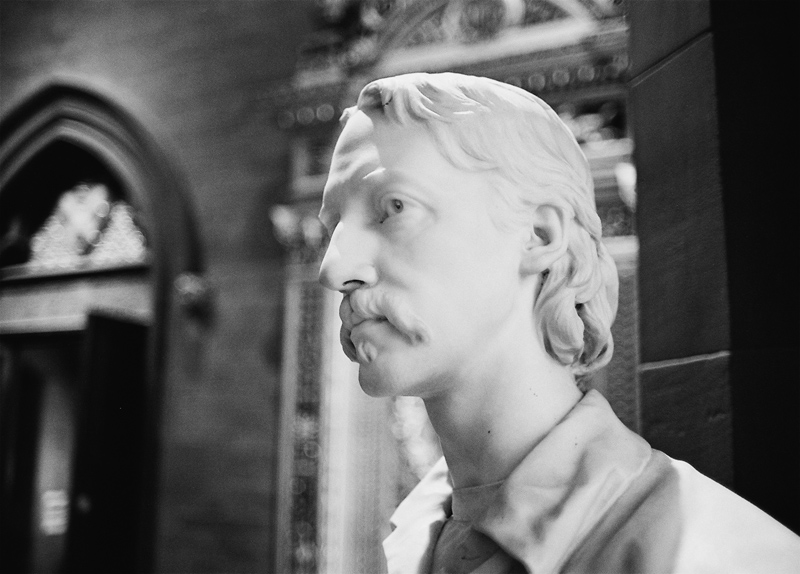 I’m amazed at how familiar this bust of Stevenson is. It’s a face you can imagine seeing in any Edinburgh pub. 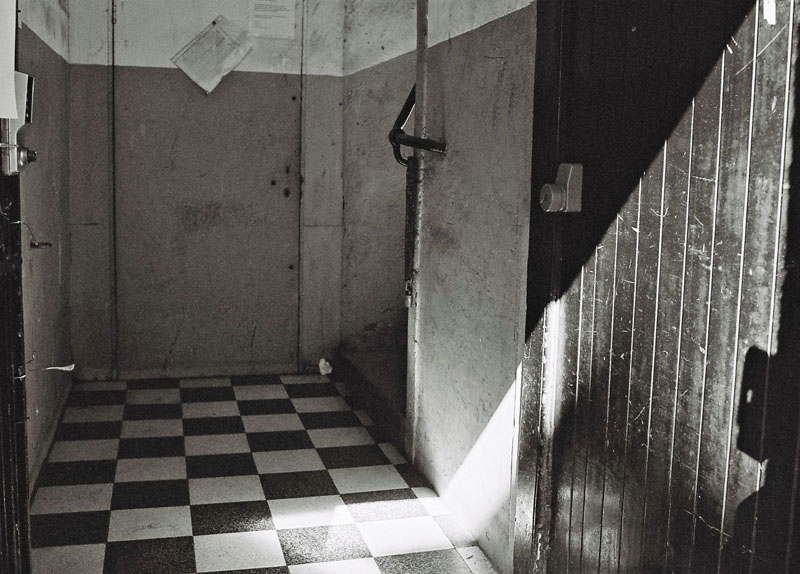 I was in Atget mode here (Atget would have loved Edinburgh), but things didn’t quite work out that way. Note the shadow of the Robot, lower right, and the alien’s two-digit hand, preparing to thrust itself down the stair. Unfortunately, I ran out of film for the fight… 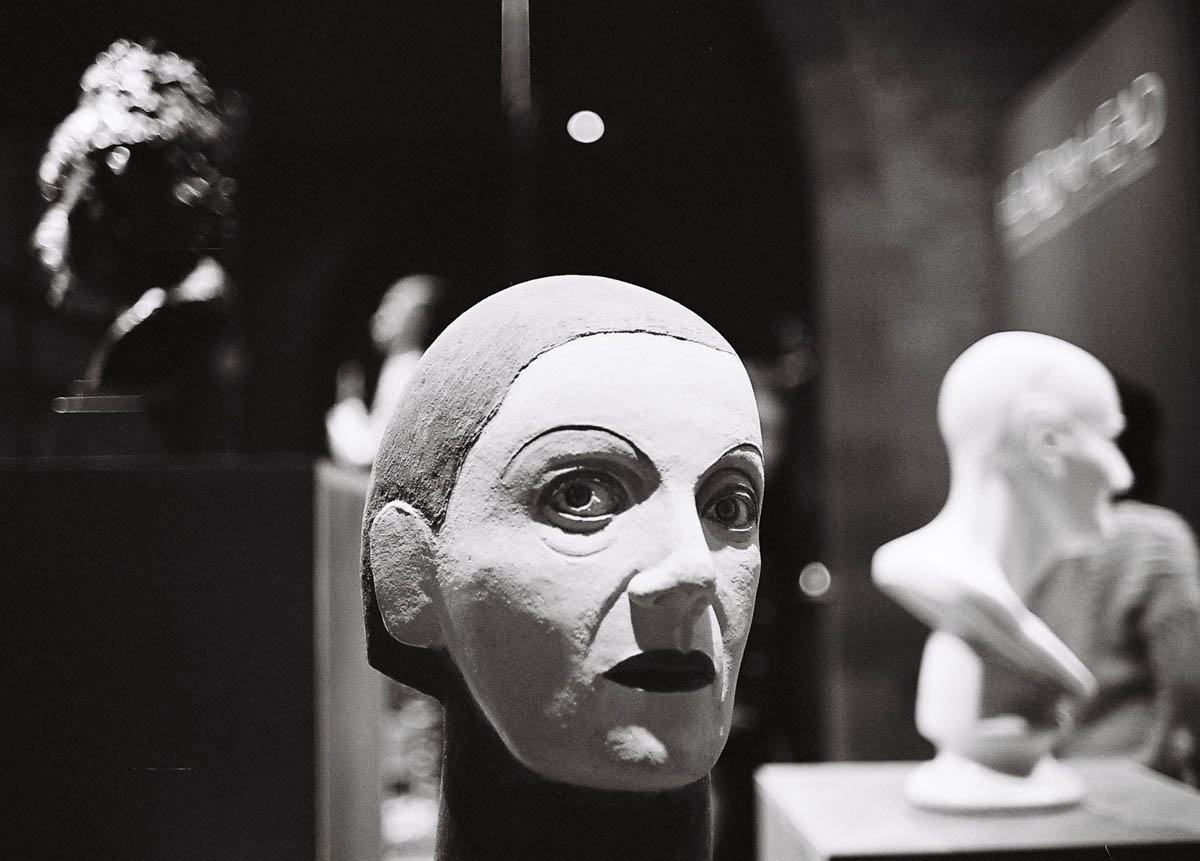 The Scottish National Portrait Gallery has been a rich resource for my imagery, and I am particularly pleased with how this one turned out, with the spotlight above Jean’s head, framed by the figures either side. 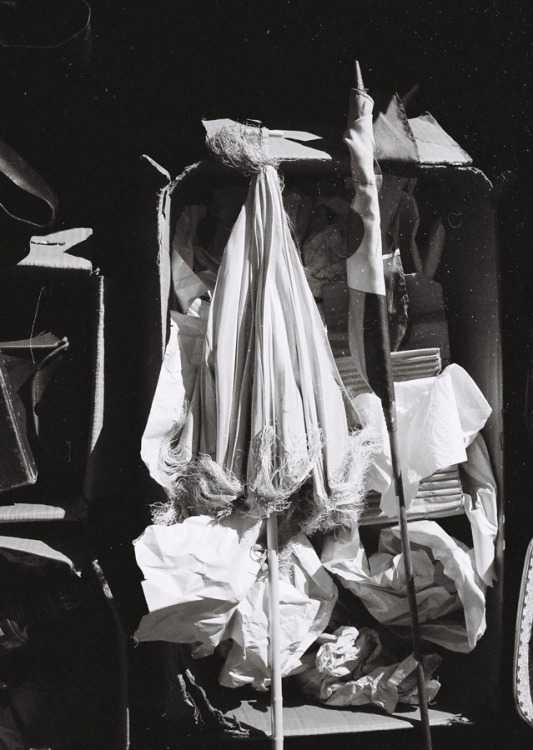 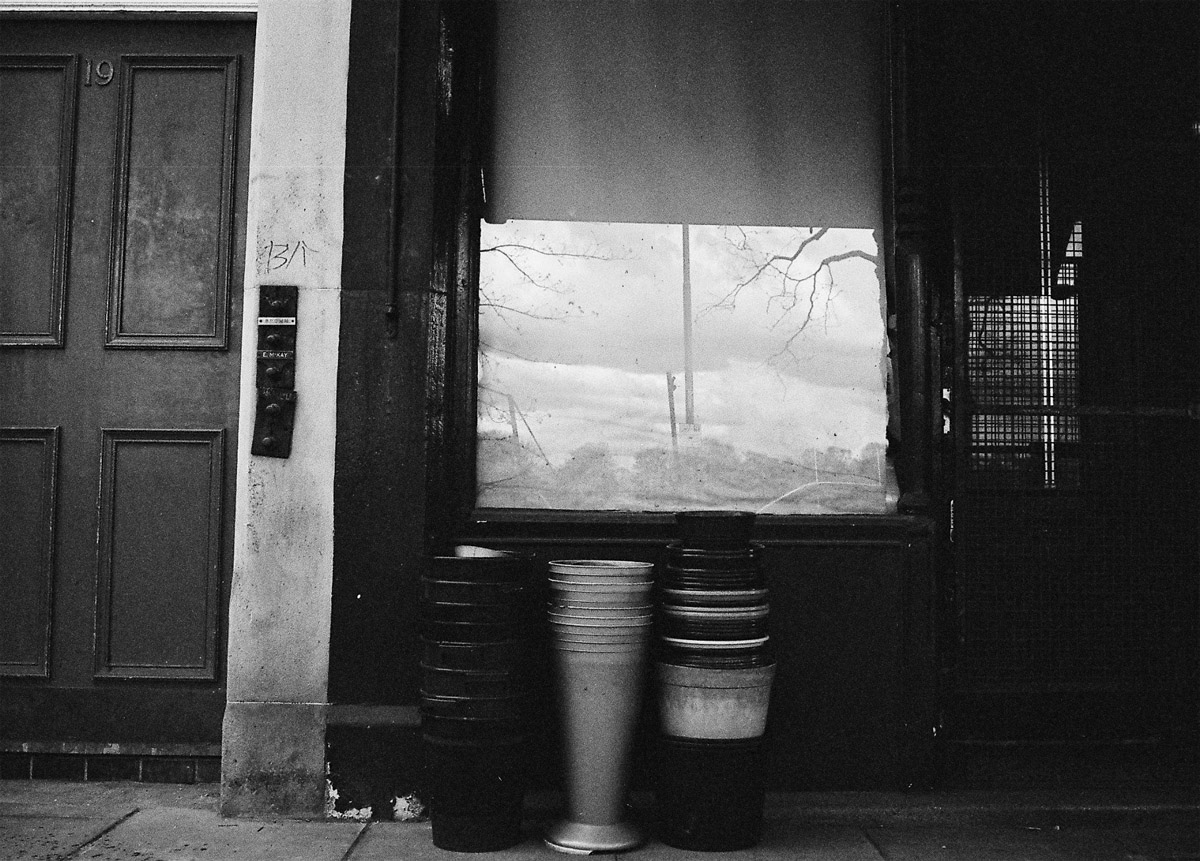 I like how it’s quite hard to figure this one out, so I won’t explain it. The pots are often stuffed with flowers and thistles, and complement the only other commodity this shop sells: wine. 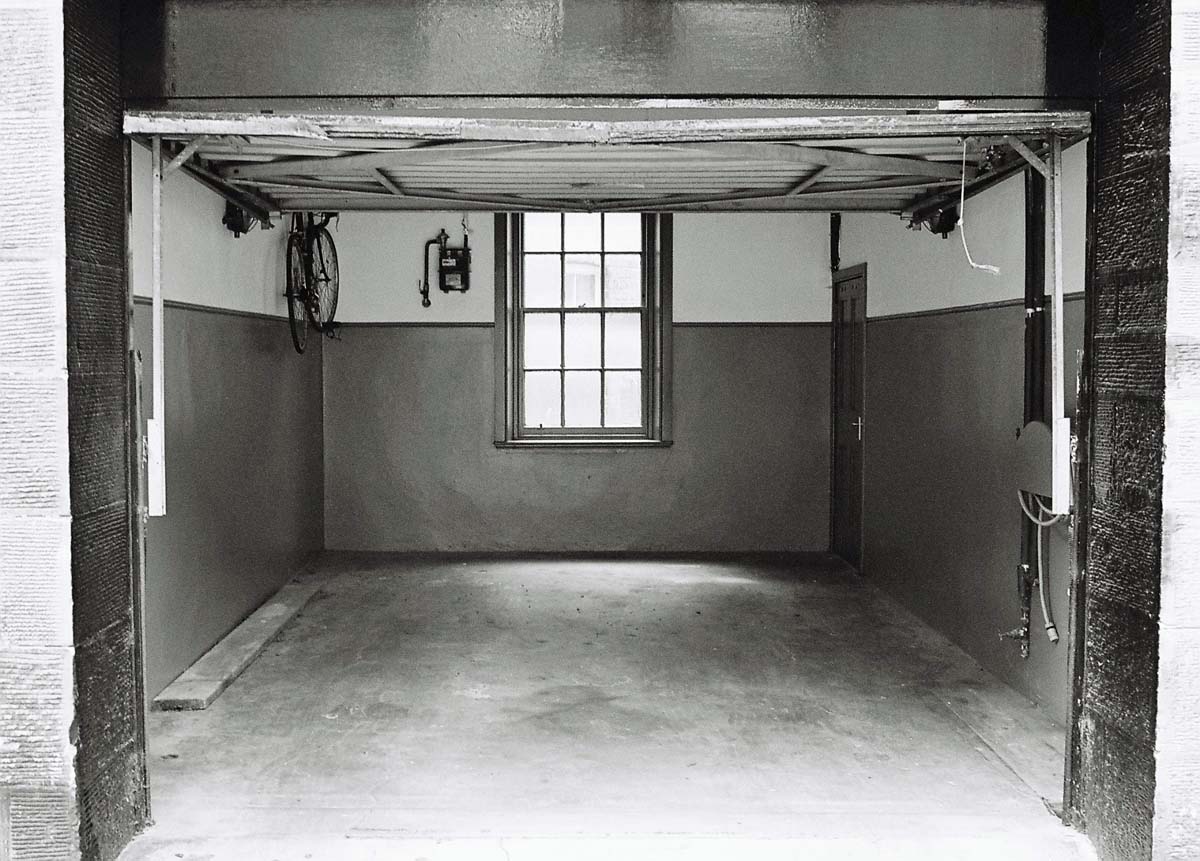 The entire garage I regard as a “found object”, and I rarely tire looking at its many interesting details. I’ve passed this garage many, many times, and every single time it has been open, as if on display as an art installation. It might well be.

Ballad of The Fox And The Swans
Ilford XP2.
Inverleith Park, Edinburgh, 2015 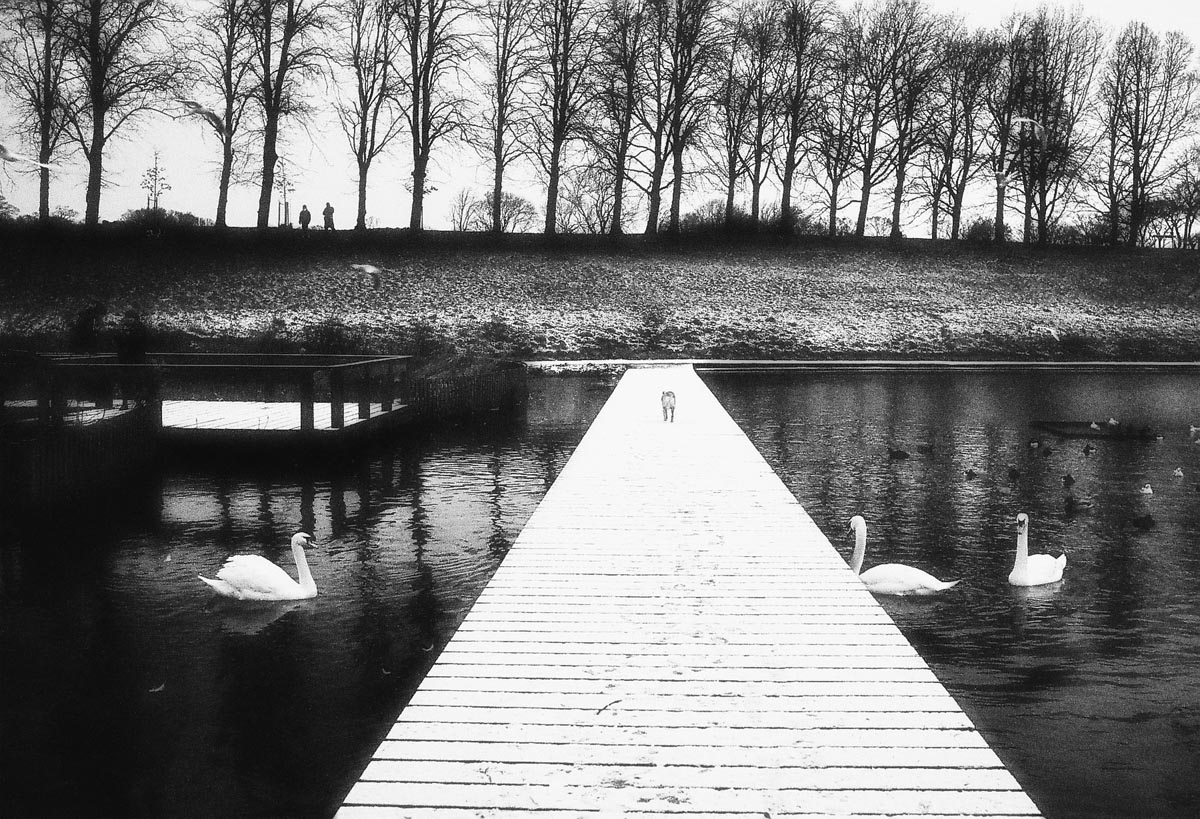 A lesson in always having your camera switched on and primed. I had been staring at a wall, a quite interesting wall, contemplating whether I should take an image of it, when suddenly I felt the urge to turn around. The scene quickly leapt into my mind and camera at almost the same instant. The fox stopped and stared at me, before turning and sloping off, as foxes do. I never noticed the two characters on the hill until after the film was developed. I have once seen the carcass of a swan on the edge of the pond… 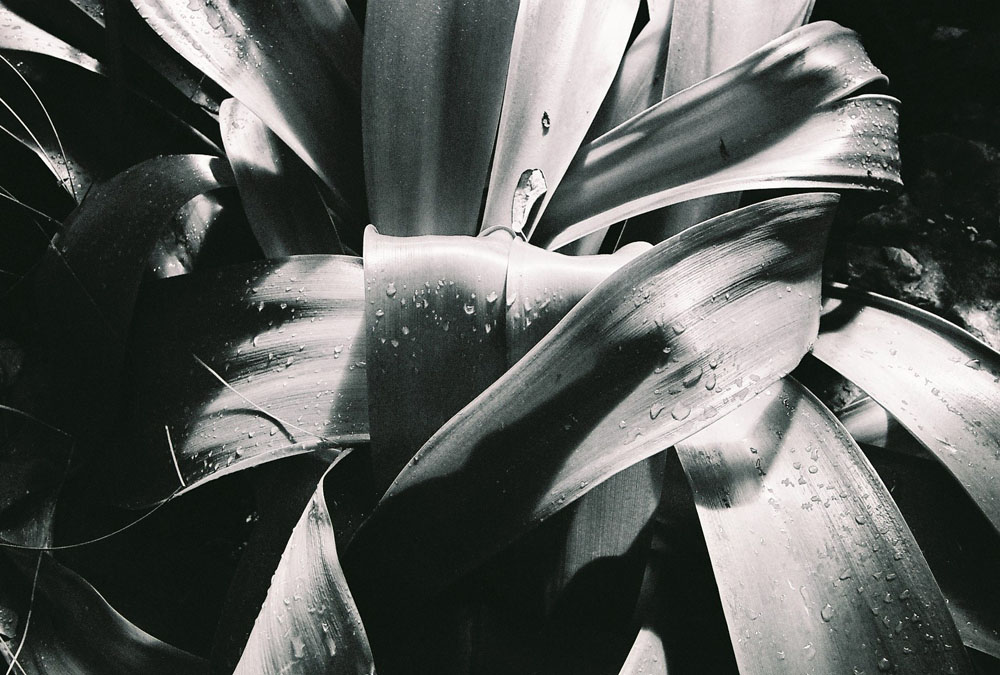 The following four images were done with a red filter and SFX film: 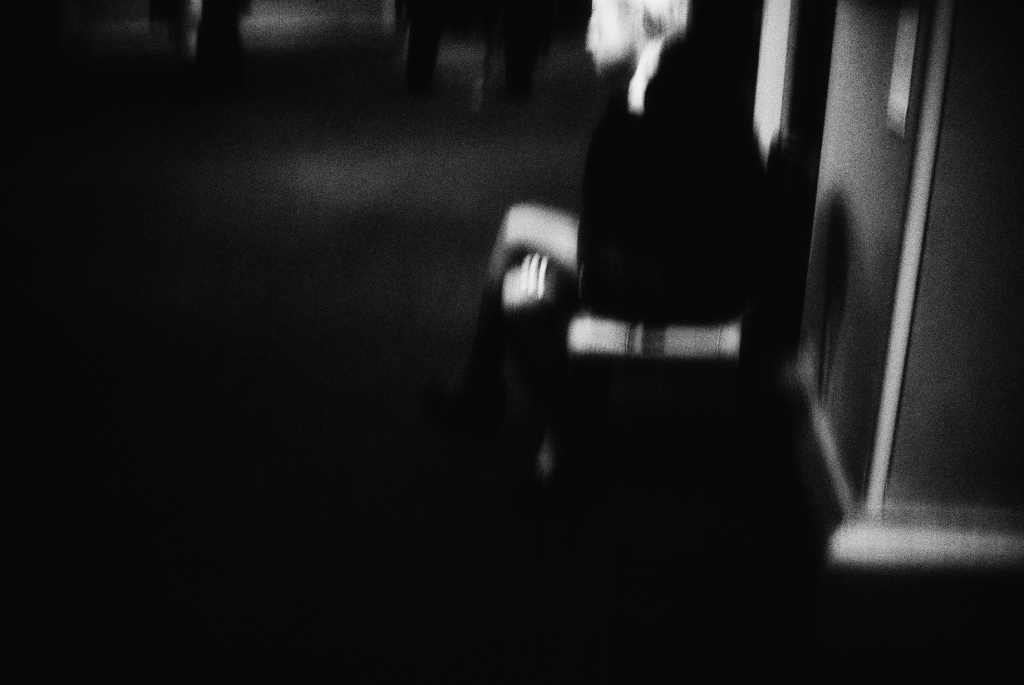 This girl was working as a security officer at the National Gallery. At this moment her body was in the room, but her mind was far, far away. Although her eyes were open, I could have run off with a Rembrandt without her noticing. She just didn’t seem connected with her post at all. The awkward placement, and chopped-off top of her head, are deliberate, likewise the blurring effect. I love those fingers between her knees! 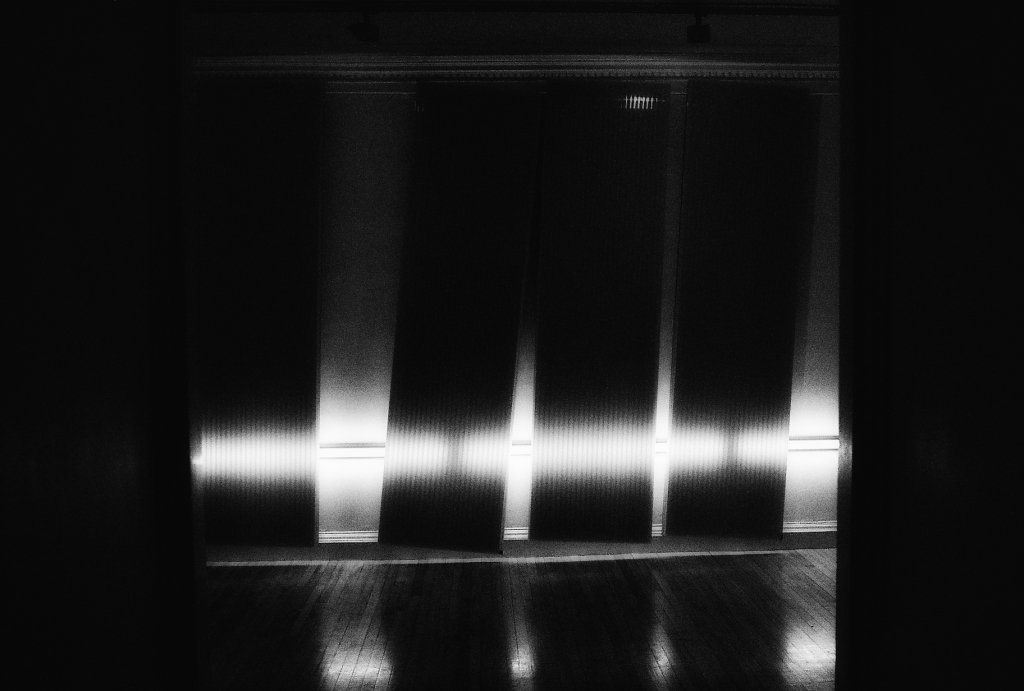 The Kiss, the Leer, and the Blush
National Gallery, Edinburgh, 2014 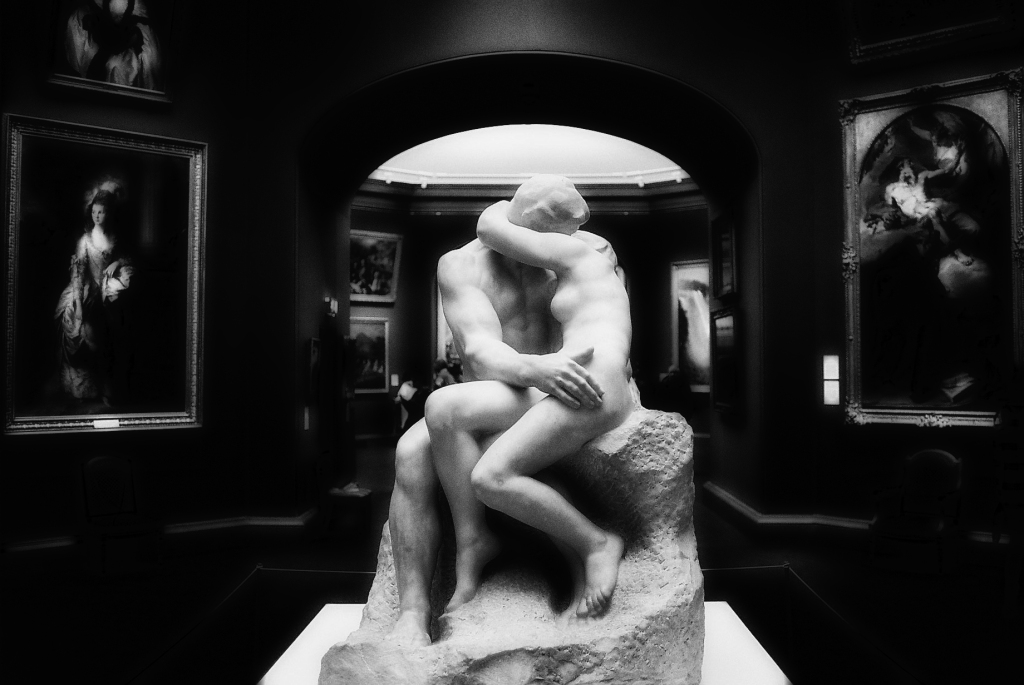 Art works are aware of each other, you know… 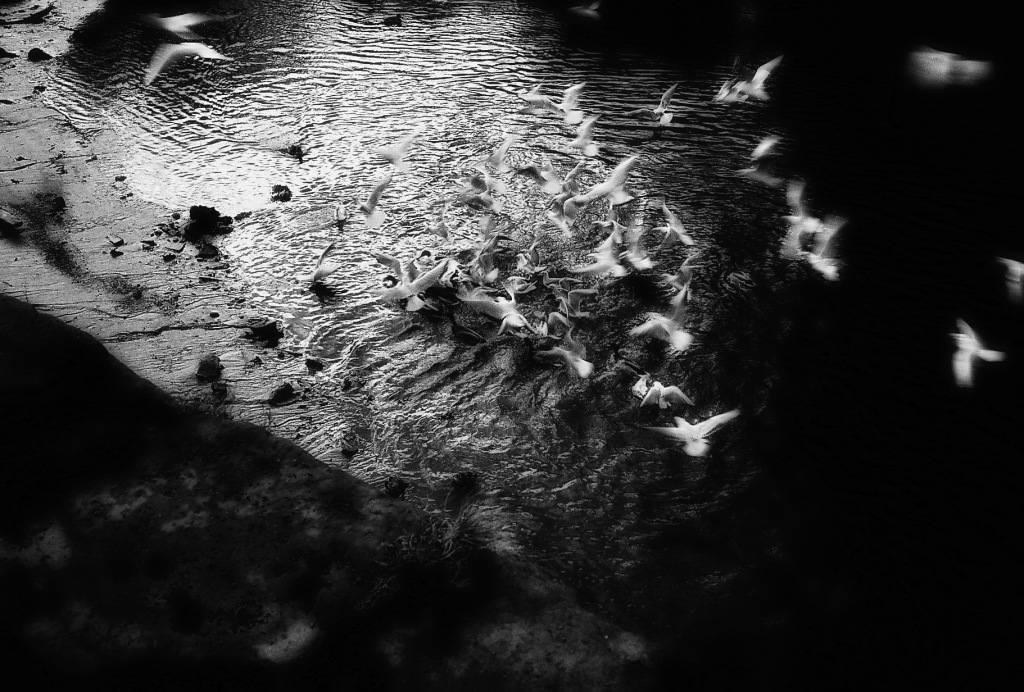 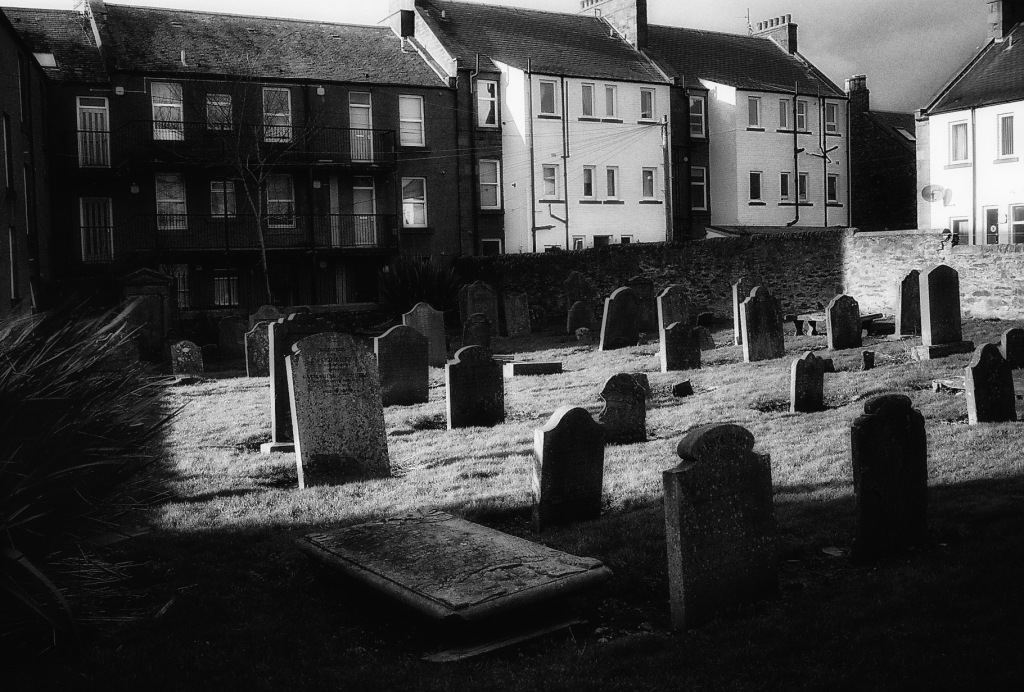 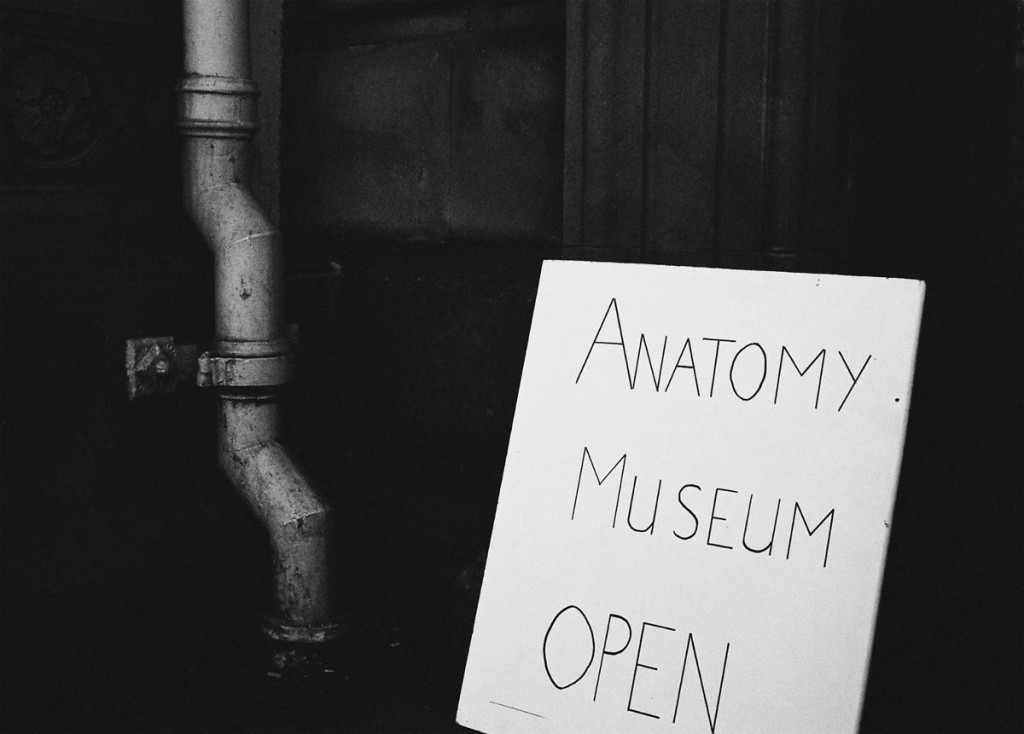 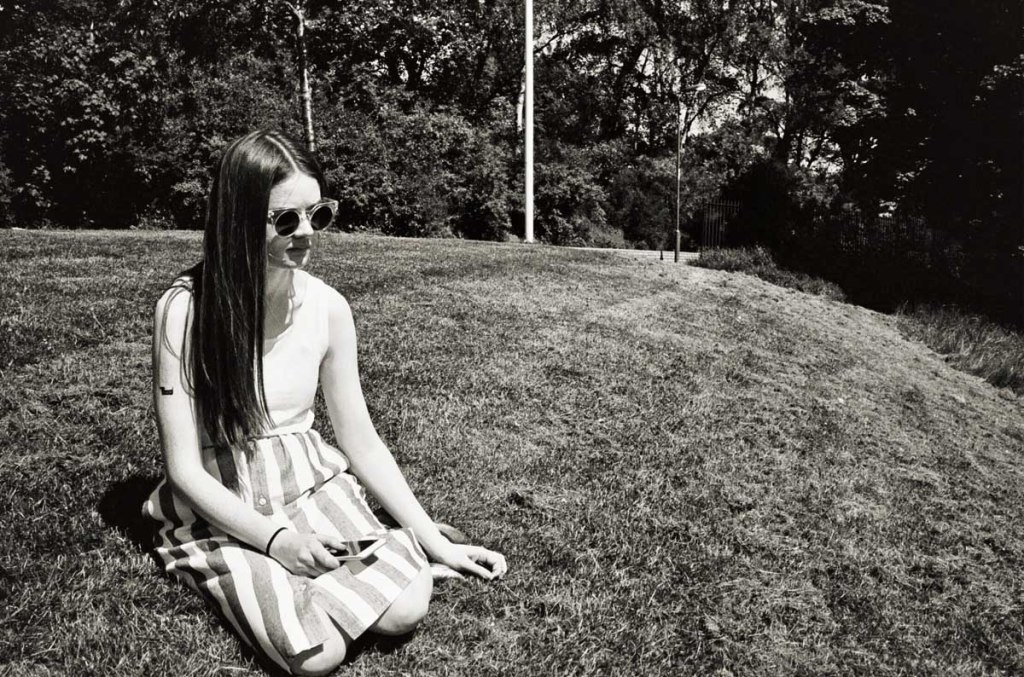 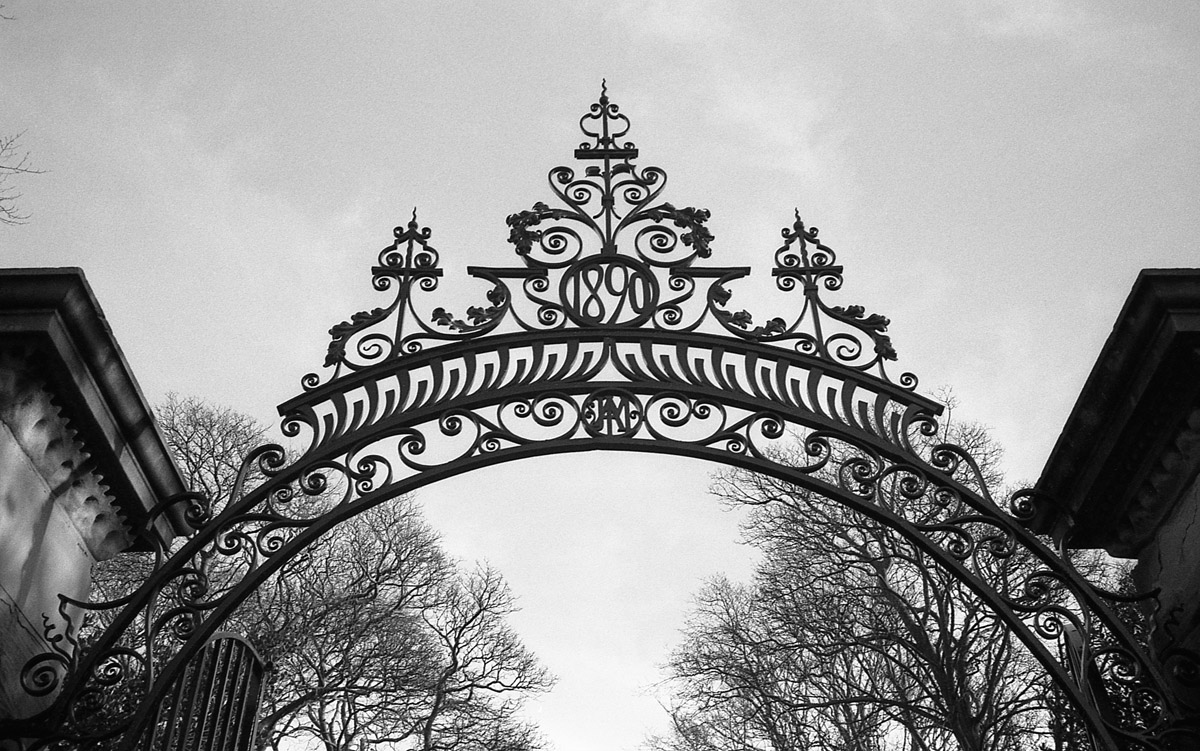